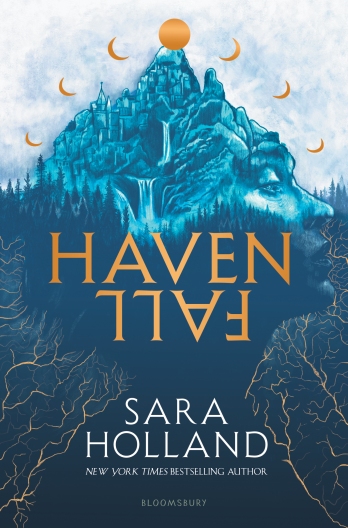 A safe haven between four realms. The girl sworn to protect it–at any cost.

Hidden deep in the mountains of Colorado lies the Inn at Havenfall, a sanctuary that connects ancient worlds–each with their own magic–together. For generations, the inn has protected all who seek refuge within its walls, and any who disrupt the peace can never return.

For Maddie Morrow, summers at the inn are more than a chance to experience this magic first-hand. Havenfall is an escape from reality, where her mother sits on death row accused of murdering Maddie’s brother. It’s where Maddie fell in love with handsome Fiorden soldier Brekken. And it’s where one day she hopes to inherit the role of Innkeeper from her beloved uncle.

But this summer, the impossible happens–a dead body is found, shattering everything the inn stands for. With Brekken missing, her uncle gravely injured, and a dangerous creature on the loose, Maddie suddenly finds herself responsible for the safety of everyone in Havenfall. She’ll do anything to uncover the truth, even if it means working together with an alluring new staffer Taya, who seems to know more than she’s letting on. As dark secrets are revealed about the inn itself, one thing becomes clear to Maddie–no one can be trusted, and no one is safe . . .

Havenfall a special hidden treasure of an Inn where magical realms collide! I really liked the set up to this world and magic system! I wouldn’t say the world building is huge, but it’s not really needed for the focus of this story.

Maddie is our sole POV and character for this book and most of the time I enjoyed her. She’s had to deal with in her life with her past and the PTSD from it. Shes thrown into the role she’s always dreamed of, but nothing is as it should be. I felt like her reactions were realistic and given her age and scenario I thought the way things played out was very well done. I like the way she changed through out the book with each new bit of information.

Taya ends up being a huge part of this story and even though I didn’t quite like how she’s first introduced and handled. I ended up almost liking her more and very interested to see where her story line is going.

This was very much a good fantasy book. I liked the magic it made sense and the twists with it near the end have me really interested. I like the characters and even the bad guy. I will say some of the twists I say coming pretty early on, but I liked it enough that I’ll definitely be getting the second book and will recommend it to friends!

You can find me here!

Mom of two little geeklings. Inspired Author. Intense Reader. Hardcore nerd for sailor moon, mangas, xena and lots of others. Follow my Instagram for lots of goodies: https://www.instagram.com/chelcic37/ View all posts by moonprincess37